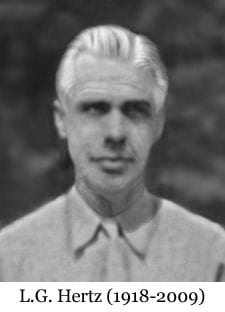 The poems of L. G. Hertz often start off talking about one thing, only to reveal that they are talking about something else. Hertz’s rhyming poetry is traditional in style and easy to read, but it is full of unexpected parallels, combining things that at first seem to be incongruous, for example, The Ibis and the Tapestry, Hiking and Reading, and Auditions of Red.

Strange resemblances come to light (Predators, Fantasies and Textbooks). Everyday objects take on a life of their own (Alarm Clock, Intermediaries, The Bedazzled Stag), and no matter where the reader finds himself, the scene can be both familiar and startling (Eye Chart, Horsepower). Delving into Hertz’s poems, one arrives at a place where, for example, fish turn into books (The Fish Stalls) and music is a disease (Feast in the Time of Plague).

Hertz compared reading to A Headlong Ride, and his own poetry offers such an adventure. Images often shift suddenly in size and scale, going from miniature to magnified, and vice versa (If Rhyme is a Trap, High-Wire Act). Different epochs coincide (The Piers Have Shifted); human and geologic time overlap (A Fractious Sweetness); and time travel has its own etiquette (Mars-Earth Phrasebook).

Many of Hertz’s poems focus on music and the arts (The Piano Tuner, The Portable Soprano, Dutch Still Life). Architecture in particular is a mirror of human emotions (Shibumi and the Baroque, Steep Lot), and within the varied settings of Hertz’s poems, images mix the outer and inner world (In a Draft, The Elevator Banks of the Lethe Building). Familiar landmarks are seen in a new light (The Hotel St. Bonaventure), and foreign locales are inseparable from American culture (Remake, The Tourists, The Un-Exotic).

One of L.G. Hertz’s favorite subjects is American English with its quirks and delights, and his light-hearted humorous poems — such as My English-Speaking Dog, A Quartet, and Summer Reading — show a special appreciation for students, especially those who are learning English as a second language. The history of English is a source of fun in Sleeping Beauty, The Bubbling Vernacular, and Degenerate.

“A poem is a conversation between two friends — the reader and the poet,” said L.G. Hertz. “They both contribute their own personal reactions, and as long as the reader keeps on reading, the conversation develops.” Hertz’s poems invite readers to accompany him into variations and complications (The Fire Discusses Everything, The Idea of a Surface , Another Algebra). He explores the dividing line between logic and emotion (Life-Size, Principles of Dowsing, The Three Twilights).

Hidden affinities lie at the heart of all of the poems of L.G. Hertz, and he returns again and again to the theme that antiquity is inherent in modernity (The Roofers, Danish Cabinet, The Fight Choreographer of Laocoön), and religious faith inherent in science (Equilibrium, Powers of Ten, Duns Scotus on Television). Man is a fellow creature (My Sister Fish), an integral part of Nature (Bird Manqué), and a product of the elements (Is Space a Palace?).

Editor’s Note: Many of the poems in this website are provided with background notes for students of English. Poems with notes are denoted by a bullet • next to the title in the Table of Contents for each of the eight collections: Nijinsky’s Horse, The Bubbling Vernacular, Square Dance, Renting the Moon for a Party, That Crouching Spirit, The Four Ponies of the Apocalypse, The Foot Zodiac, and Beyond the Notation.